I wanted to share a little bit of personal history with the harp: 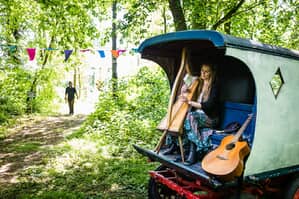 My father was a musician and keen that his children would love music also, but none of us three showed any interest, until I saw a man playing a harp at my school fete. I was mesmerised! Already 11 years old by then, my parents were eager that I learned quickly but were unable to afford the lessons, so they bought me a Cymbala, which is a toy instrument similar to the harp. They said to me if I still enjoyed playing it after one year they would invest in harp lessons.

One year later and I was more motivated than ever to get my hands on a harp, and so my parents put their every last penny into my lessons and harp rental.

To begin with I was talented, eager and motivated, but as soon as music notation was brought in I could not master it. I struggled a lot. All of my friends who played surpassed me and they all flew ahead and finished their modules. I was left behind thinking I was rubbish. I loved improvising with my teacher and I began writing my own tunes, much to my teacher’s surprise. I remember one day my teacher saying to me “I know you struggle a lot more than the others but you remind me of me. I bet that you are the one out of all of my pupils that becomes a harpist” I thought he was crazy and I thought “nice try mate, I’m rubbish and I know it.”

One year later my teacher was moving and I was ready to give up. During my G.C.S.E years I barely played until one day my father said to me “you know instruments are supposed to be fun, the music notation, the grades and the modules are all just guidelines. Just play with it and have fun.” I began to do this. I began to write my own songs and find new ways to teach myself and once again that initial wonder was reborn. I loved expressing myself through music and playing with it, and found I didn’t need the theory to do that.

At 18 years old I had a boyfriend who lived in Germany. He was an exchange student and when he left the UK I was determined to keep the relationship going so I got a job in a factory to pay for my flights. The factory staff there were so incredibly racist to the Polish workers that it disgusted me and when they fired two of them for taking a toilet break, I too walked out and never came back. I found myself walking through town thinking “now what? Has this just cost me my relationship?” I suddenly had an idea. I went home and got my harp, took to the streets and played.

I was greeted with such warmth by the general public and I made a day’s wages in just 3 hours. My professional life as a harper began there and has never really ended. Even though I have had other careers since I have always had my harp to fall back on.

I am a travelling soul and I spent a year in the USA and in South Africa without my harp and it was painful so I vowed never to leave my harp at home again. My harp came with me to Australia, all over Europe, Hong Kong, India, New Zealand, Australia a second time, the Philippines, the USA and Canada. And I even took it with me on my back when I walked the Camino, a 500 mile hike across Spain. It is part of me. It even came on our Honeymoon!

My harp has opened so many doors, it has bridged cultures and classes, and it is my escape and my calm and my way to express all that I am. I hope for you that your harp can bring you as much joy as my harp has to me and I cannot stress how much more valuable passion and determination is than skill.

Here is the link:

(Creag-I would add that the key to grit is to do things in a way that you enjoy them!)

What you’ll learn at the end of your first year

For those of you looking at our course and wondering…

Morwenna got called to moonlight as an emergency puppy midwife!…

How to Learn to Play the Harp

A Beginner’s Guide to the World of Harping   Who…

Follow Us
Recent Posts
Categories
© 2014-2020 All rights reserved, Hands on Harps | Graphics by Get Nashi
Back To Top
×