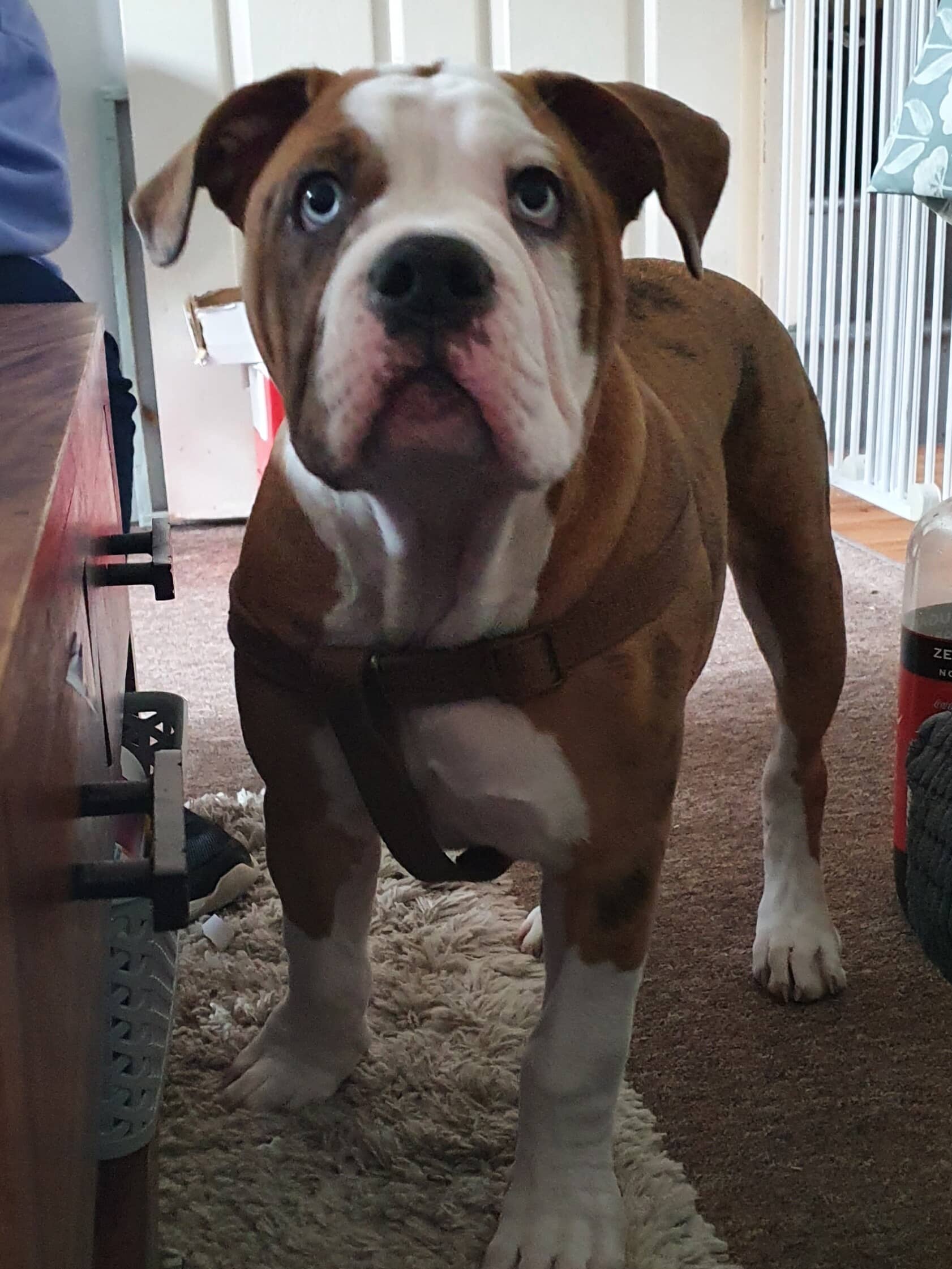 So I’m sitting here writing this in the last week of home-schooling. The sun is shining, and a glimmer of hope is on the horizon!

Another 2 weeks have passed and what a difference, I don’t know about anyone else but this lockdown has been extremely challenging and the anxiety of going back to work and how the kids will settle is resulting in a newfound craving for chocolate. Broadly, things here in the Tong household have been on the up, more good days than bad lately, we may have some exciting news in the (hopefully) near future and we have become more productive again, walking more, eating better (until the kids are in bed at least) and smiling more too.

As I mentioned in the last blog, we have had a guest for the past couple of weeks, Rufus. Not only was this really exciting and gave us a reason to get out for walks and have a better routine, but I was also intrigued as to what he would think of the harp….would he try to eat it? Would his response be “Thanks Sar for this mighty amazing wooden toy” He is only a young boy after all. Or would he do what a typical feline (not Purdy) would do… curl up and listen? The answer was very, very sweet. He looked extremely confused for the whole of the first practice that he witnessed. He sat stock still, staring at me, head cocked to one side. “What ARE you doing Sar?” You could really tell he wasn’t sure, but at the same time he was frozen to the spot, watching every move I made for half an hour. As soon as I stopped he went and sat at the back door, asked to go out and sat, watching the stars. It was really moving to see that reaction from him, at this point he had only been with me for a couple of days, so every part of our routine was still new to him. He could have reacted in so many adverse ways but instead he chose to listen and then watch the stars. Gorgeous boy.

For the remaining lessons I had with him he was already curled up on the sofa when I started but he always put his head up to listen and watch, especially when I messed up! After a while, he rested his head so that he could watch without the effort of moving…yes, I’m still making that many mistakes. I think he loved the tranquility of the room, the calm that surrounded us as I played, particularly on “Week 6 – Exercises”, playing a couple of chords. When I was revisiting those, he looked like he was going to fall asleep….until I slipped…sorry Rufus!

As I was attempting weeks 7 and 8 most practices were good. Things went slowly, but I felt ok. One evening I felt like I was really behind, it felt like too much. I was still really ropey on “Week 5 – Happy Birthday”. Eventually I “rage quit”. In my head this was permanent. Don’t worry no harps were harmed during this time. Promise!

My thought process went backwards, to my old ways, punishing myself and comparing myself to you other fantastic peeps… “will I ever be good at anything?? Or just mediocre with everything?” ”Other people are playing full-on tunes with chords and everything by now, I’m obviously just rubbish at everything I touch.” These thoughts led to the rage quit and I stepped out into the crisp cold night, shut the door behind me, stood there in my PJ’s and cried. I suddenly realised that it was old thought processes returning, not just about learning the harp, but from my previous marriage and my childhood. How could it affect me like this? It’s just learning the harp, and anyway I had had CBT therapy.

I was meant to be dealing with this better. I don’t really hate the harp, I hate the thought processes it’s forcing me to work through, it’s dealing with deep emotions that are the reason I give everything up so quickly. The reason they keep coming to a head is that this time I’m not giving up, this time I have to carry on. So I sucked it up and went back in. This time I just played glissandos, over and over again until tunes, simple as they may be, started popping into my head. I even had a go at just plucking the strings however I felt.

I finished the practice. Aside from the personal reasons for my rage quit, I had a lightbulb moment on my final practice of the week, I had to log in to run through the more recent tunes and as I was watching, I realised that I had slipped on the basics of finger placement. My hands were like pincers, I was being lazy with how I placed my fingers ready for the next note as it felt easier to completely let go, which may be the case for the first few tunes, but not for Ode to Joy…at all. I decided that for the next couple of weeks I would pick out all of the finger and wrist exercises and practice just those for the first 10-15 minutes, I needed to get these right. Thank goodness evenings like this weren’t every practice!

I have to say that change is in the air, so the next couple of weeks will be the start of a trial run to see how playing the harp fits into my everyday life, not just lockdown life. I stay optimistic at the moment, on the whole my thought processes are better every day and so I hope it will have a knock-on effect with practice. I think for me it’s important to remember that, even if I fall a few tunes behind, I need to get on top of the finger placement. I have to do this in my own time at my own pace. After all, no one can hire me for weddings yet anyway! So what’s the rush! I really think that will be the biggest challenge that if I overcome, would massively improve how quickly I can learn. I still love the idea of playing the harp, it’s cool and quirky but can I maintain practice in post lockdown life? I hope so!

P.S. Just in case you were wondering, Purdy and I are regularly having evil stare contests from across the room. I gave affection to another animal, yet somehow it’s ok for her to seek attention from another human. Double standards methinks! Well, until at least dinner time for Purdy anyway ????

Until the next blog, stay safe my friends!