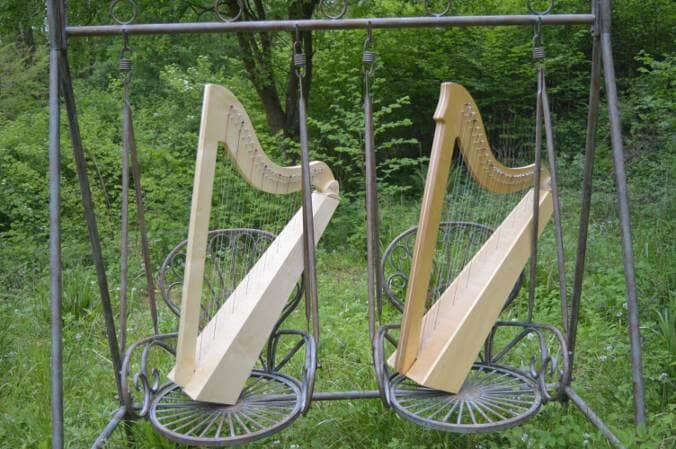 Since coming back from our travels and setting up Hands on Harps in September 2013, we’re happy to announce that we’ve now made 100 harps!

Through plenty of blood, sweat, tears, loads of mistakes, celebrations and lessons, we’ve honed the design of our harp. After the first 5 or so fairly dreadful harps (the first one fell over backwards because the centre of gravity was in the wrong place, the pillar on the second one bent like a banana, hence the pillar support the harps now have) I reached a design I was happy with and prepared to sell. Over the next 95 harps, with input from all sorts of luthiers, engineers, teachers, musicians and designers, we have improved the harp so much that I’m now over the moon about it, so we’re putting on a party and calling it a launch!

Charlie, Hannah and I put our heads together in the early month of this year and made all the improvements we could think of. The result is a harp that weighs less than the old one and sounds brighter and more balanced.

Have a look at this comparison of the old design vs the new:

So come along on Sunday 2nd July at the Subscription Rooms in Nailsworth at 1.30. There’ll be some music from our harp group, a chance to see where the harps are made, light refreshments and, best of all, the chance to have a go on our new design! And there’ll be deals to be had on the day, with new customers who put down a deposit and set up a standing order able to have one month harp hire free, or the equivalent value off the purchase of a harp.

Get in touch through info@handsonharps.com or 07961512428 to find out more or to let us know you’re coming.

We hope to see you there.

We're excited to announce a new sustainability partnership with Zellar.…

What happened to Sar?

So here we are….what a busy couple of months!!! The…

No Harps Were Harmed in the Making of This Blog

Follow Us
Recent Posts
Categories
© 2014-2021 All rights reserved, Hands on Harps | Graphics by Get Nashi
Back To Top
We use cookies to ensure that we give you the best experience on our website. If you continue to use this site we will assume that you are happy with it.OkPrivacy policy